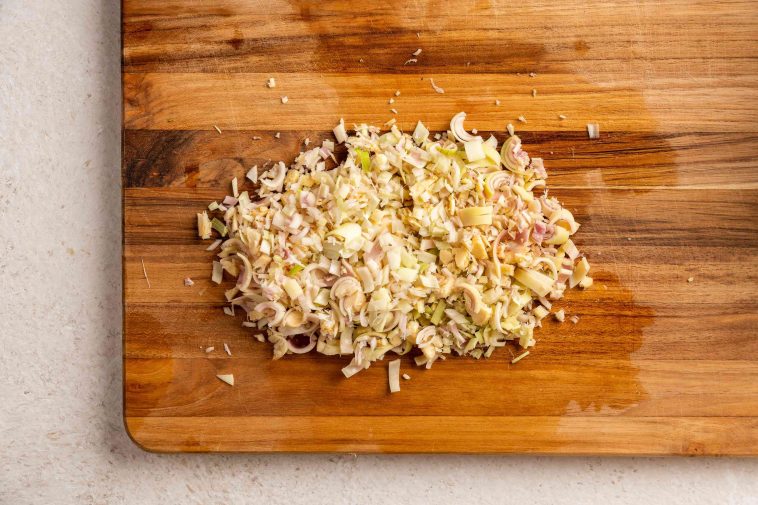 Lemongrass is a popular herb, especially in Thai, Vietnamese, and Asian cuisines. Used as a flavoring agent for many soups and stews, lemongrass also adds an aromatic flavor to marinades and sauces. To get the best out of its subtle flavor, improper cutting will make it tough and chewy when cooked with other ingredients.

First of all, find fresh lemongrass and get good-sized stalks with a few side shoots. Chop off and discard the woody base of the stalk just where it meets the thicker green stalk. The tougher outer leaves of the lemongrass plant should be removed. It will reveal a softer, yellowish core with a sharp lemon scent. The pale yellow stalk is needed for bright flavor and is minced to add a citrusy aroma.

Cut off about an inch from the bulb so that you have a good amount of space to chop the stalk into small pieces.

Make sure you have a stable grip on your sharp knife and chop directly down in front of you. If your lemongrass is too tough to cut with just one whack, try chopping at it from different angles until it becomes easier to slice.

Stick to slicing horizontally since this can help prevent any uneven or jagged edges resulting from vertical chopping. Hold it by its base and then slice it thinly from the thickest part of the stalk.

Make several cuts below the first cut for a more even mince. Stop slicing once you reach its tender center section or until your slices resemble coarse ground black pepper. Aim for about thick slices, to begin with, and then adjust the thickness to your liking.

After cutting off the bulb end, make sure to use this part of the lemongrass stalk in another recipe or discard it; it’s too tough to be minced. You can save the bulb ends until you have enough stalks saved up. The rest of the upper stalks are great for flavoring tea.

5. Make Use of the Upper Stalks

Try using one or two inches higher up on your lemongrass lengthier upper extremities for an extra flavor that isn’t as powerful as using just the bulbous ends. You can use a paring knife to scrape the fragrant lemon fibers from the upper stalks and add them to dishes.

Now that you have your lemongrass prepared, it’s time to get chopping.

You can also use a food processor to prepare lemongrass instead of mortar and pestle. It’s entirely up to your choice.

Some Other Tips To Mince Lemongrass

Other tips that you can consider to mince lemongrass include:

Lemongrass (Cymbopogon citrates) is a tall, grass-like plant that grows in warmer climates. It’s called “citronella” in some parts of the world and is used as an essential ingredient to flavor foods and make perfumes and insect repellents.

2. How Do I Use Lemongrass?

Lemongrass is a fragrant ingredient in many Southeast Asian dishes, including soups and curries. It’s also used to flavor teas, stir-fries, liqueurs, and candies. It can be ground into a fine powder or minced finely before being added to food.

Chop the stalks into small pieces before grinding with a mortar and pestle or an electric spice grinder until fine. Whole stalks can also be simmered in soups or stocks for 10 minutes before cooking to add great depth of flavor to your dish.

3. How To Deal With Dried Lemongrass?

To mince the dried lemongrass, start by chopping along one-half of the lemongrass lengthwise into very thin strips. Then, turn that piece 90 degrees and chop again lengthwise to create fine slivers. You can then either discard these slivers or continue to chop them further until you have reached your desired consistency.

Some prefer to chop their lemongrass as finely as possible, while others prefer a slightly less fine chop. Be aware that dried stalks are tougher during their lengthy drying process and may require more work to mince.

Mincing fresh lemongrass stalks is a great way to add flavor to your dishes without adding too much sodium. We’ve shown you how to mince lemongrass using easy steps in this article. We hope that you found this information helpful and that you will use it in your own cooking adventures. What dish are you going to make with lemongrass? Let us know in the comments below! 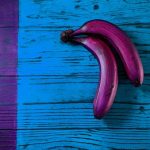 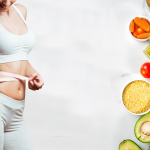