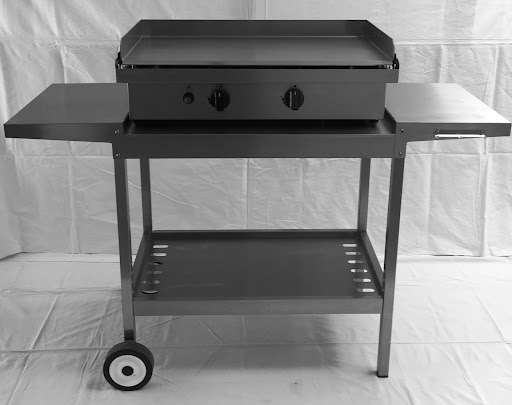 Cooking on a Blackstone griddle is the closest you will ever get to making real restaurant-quality food.

These come in sizes ranging from 22″ to 36″ and boast a flat top made from cold-rolled steel.

This flat steel top provides an even heat distribution and controlled cooking across its entire surface.

You can cook several meals at once on one of these. They are perfect for the outdoor cooking enthusiast who loves creating a grilled feast for a crowd. Let’s learn how to cook on a Blackstone griddle!

How to Cook on A Blackstone Griddle

Here is a concise but thorough guide to cooking on a Blackstone griddle.

Owning a Blackstone griddle is very much like owning a cast iron pan. You must season it with a bit of oil before using it.

If you are using a new one just out of the box, wash it first with grease-cutting dish soap. Rinse it well because the manufacturer coats its cooking tops with rust protective oil before shipping.

To season the griddle top, apply olive oil all over its surface and push it around with a flat spatula. Make sure that the entire cooking surface is completely covered with a thin coat of oil. If any extra oil is gathered in the corners, soak up the excess with a paper towel.

Turn the temperature to high on all the cooking zones. After a minute, you will notice your griddle top is turning a brownish-black,

They are tempered with oil in this fashion to prevent food from sticking to the steel surface of the grill. The seasoned cooking surface also gives your food an attractive grilled coating with a bit of a crisp.

Be sure to season your griddle with a bit of oil every time you are done cooking so that the surface is ready for grilling your next feast.

Here are the necessary tools to cook on a Blackstone griddle. Remember that thin metal tools work best on hot griddle cooking tops like a Blackstone rolled steel top.

Make sure you have at least 2 spatulas, one large enough to flip burgers and another even larger for flipping pancakes.

The spatulas should be square with rounded edges, so they don’t scratch the cast iron top of the griddle.

Spatulas can also be used to scrape together a stir fry or fold over scrambled eggs.

Tongs can be used to grab just about anything from a hot surface and move it to another spot on the griddle.

They are especially handy for flipping over steaks and chops and handling odd-shaped foods like crab legs or stuffed green peppers.

A scraper is used to pull grease and burnt food off the seasoned griddle’s flat top. Use it after every grilling to keep the surface smooth and flat.

Scrape carefully to avoid scratching the blackened top that you have built up with a series of seasonings.

Squeeze bottles are filled with oil and then, during the cooking process, squirted on both food and the griddle.

You can also use oil and the scraper to remove burnt food.

Before you start cooking, preheat your griddle to the desired temperature. This can usually take about 15 minutes.

Usually, the back portion of its surface will heat up faster than the front portion. Most of them have an indicator light like a stove. The indicator light will shut off once it has reached the desired temperature.

Now that you have seasoned the grill and have your scraper, tongs, oil bottle, and spatulas in hand, you are ready to be inspired by various recipe ideas.

Simply fry up bacon, sausages, or ham on one side of the griddle and use your spatula to create over-easy or scrambled eggs on the other.

Start frying any meat about 10 minutes before you crack the egg directly onto the griddle because the eggs will be cooked in 2 or 3 minutes. For over-easy eggs, just flip them over with a spatula.

Creating scrambled eggs is a matter of pouring the eggs whipped together with cream, green onions, and a bit of cheddar cheese. Scoop it all together with a scraper or spatula until cooked and served with toast.

You can even cook toast directly on the grill by buttering slices well and placing them on the cooking surface.

The pancakes you make on a Blackstone griddle will be among the best you ever taste in your life. This is due to the blackened top crisping the edges of the pancake batter to perfection.

For a perfect finish to the burger, give them a few squirts of oil while they are cooking, and then use your spatula to press the patties down onto the griddle firmly.

As the burgers are done, you can move them to a zone where they can keep warm until serving.

One of the delicious recipes is smash burgers. These are high-quality beef balls that are soaked in butter and herbs. They are then squashed flat on the grill with a spatula until the edges are crispy and almost burnt.

For some reason, caramelized onions taste extra great when made on a Blackstone griddle. Simply cut the onions sideways so that they become long loose rings and place them on it.

Squirt the onions with oil and let them sizzle on their own. The natural sugars turn them into a beautiful crispy brown color.

Smashed potatoes are among the favorite recipes, but they require a bit of pre-cooking before putting them on the griddle.

Start by boiling baby red or yellow potatoes with skins on until they are almost soft. Preseason the griddle with oil and place the potatoes on the cooking surface.

Let the potatoes fry slightly, apply more oil and then use your spatula or scraper to smash them, so they are lying open and flat on the grill. Sprinkle liberally with salt and pepper before serving.

You will be making good use of your tongs while cooking steaks and ribs on your Blackstone griddle.

Marinate your steaks or ribs as you usually would, and then place them on the grill. Let them sizzle to perfection, adding a little oil or basting sauce as they cook.

If you like your ribs braised in sauce and cooked until almost burnt, keep them on high heat while they sizzle. Clean the surface of any sticky sauces using the scraper. Do this while the surface is still warm to help maintain the griddle top.

Lay the spears on the griddle and cook until they have a crispy, sugary outer layer. Serve with vanilla ice cream.

Advantages of Cooking on Blackstone Griddle

The large cooking space means you can prep and cook multiple foods at once. Cooking for a big crowd is a breeze!

Everything can be cooked on one big flat griddle top, so there are no extra pots, grates, or grill tops to scrub afterward.

This means you can have bacon frying on one part of the grill, pancakes on another, and eggs on yet another.

Flipping foods like burgers and pancakes can be challenging if you use a cast-iron skillet.

With griddle cooking, the food is not trapped by the sides of the pan.

The open area of the griddle also does not trap moisture, so foods end up with a nice crispy exterior but juicier interior. This is perfect for cooking foods like battered fish or hash browns.

The surface of the Blackstone griddle is very easy to clean because it has its own grease trap.

You can use your spatula to push your grease through to a hole in the griddle, where all of it is spilled into a cup.

The cup, which acts as the grease trap, is easy to remove and wash up.

There is also no need to wash a griddle, especially with soap and water, which will ruin it. The grill needs to stay “seasoned” by polishing it with some grease from your last cooking session.

Tips for Cooking on A Griddle

Here are a few tips for cooking on a Blackstone griddle.

There are very few outdoor grills as versatile as a Blackstone griddle. You can use it year-round, as long as it is under a porch or a canopy.

If you are the type of person who loves to entertain, a large Blackstone griddle is perfect as you can cook as many as 9 dishes at a time on its surface.

These allow you to make even tastier versions of your diner’s favorite foods. Meats will have moist interiors and charred outsides if you like. Starchier foods such as pancakes and potatoes will be crisped on the outside and fluffy on the inside.

It allows you much control over the cooking process, letting you switch foods to certain heat zones to cook further or keep warm. It truly is the griddle of choice for chefs that love fried foods! 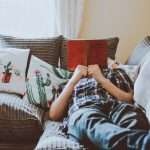