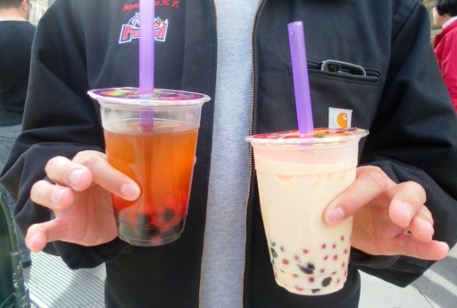 If you have been a bit confused about what the difference is when it comes to bubble tea vs boba, you are not alone. That is because the names bubble tea and boba tea refer to exactly the same drink.

Both bubble tea and boba tea are made of iced milk teas. Like all tapioca teas, both have large round boba pearls sitting at the bottom. In America, this is called bubble tea because the tapioca balls at the bottom look like bubbles.

In Asia, tapioca pearls are called boba. So if friends say, “Let’s go get a boba!” they are talking about getting bubble tea.

Bubble Tea Has Many Names

The confusion between what entails bubble tea vs boba is a technicality to do with its name. It is more American to call a boba tea a bubble tea because the drink contains large tapioca pearls called boba. It’s very similar to the way we say, “Let’s go get a burger!” when we mean hamburger.

Here are some common names for bubble tea.

In Taiwan, where it was invented in the 80s, this same drink is called both bubble tea and pearl tea.

What is Bubble Tea?

Bubble tea can be served hot or warm, but it is more common to find it served with chunky ice or blended ice.

The traditional way to prepare bubble tea is to do it by hand. The sugar, tea powders, flavorings, and tapioca balls are all shaken together in a shaker filled with shaved ice. However, in modern shops, the entire process is automated, including sealing the top of the cup with a plastic seal.

The original bubble tea drink was created in the late 1980s in Taiwan. It was a hot beverage and consisted of Taiwanese black tea, tapioca pearls, and honey. The pearls were made from cassava, which is a starchy tropical shrub.

There are two different companies claiming that they invented the beverage. The first is Tu Tsong-he of The Hanlin Tea Room, who said he was inspired to add tapioca pearls to hot tea after seeing them in a supermarket. The second is The Chun Shu Tang tea room in Taichung, which was the first to serve pearl milk tea cold in 1988.

What is Milk Tea?

The teas made with milk are called milk teas and may be mixed with any of the following: almond milk, condensed milk, coconut milk 2% milk, skim milk, soy milk, and powdered milk.

Milk teas are much more common than milk-free teas. Even the ice teas offered at boba milk tea shops have dairy in them.

There are many different types of toppings for bubble tea. They are called toppings in the boba tea business, even though they drop to the bottom of the cup after mixing.

Almost every bubble tea topping is made from tapioca starch which is a mainstay food in Asia. The most common toppings are the rectangular sticks and spherical pearls found in boba tea drinks. Once cooked, tapioca balls and bars look like clear pieces of candy.

These are spheres of tapioca starch filled with flavored fruit starches or syrups. These balls squirt juice into your mouth when you bite on them and are very popular with younger people. Popping boba flavors include coconut, honey melon, mango, and strawberry.

Jelly toppings are made from gelatin and starch and cut into different shapes such as stars, cubes, and balls. Many of the jelly toppings also have their own unique texture, with some being gummier or firmer than others.

Dried tapioca pearls are low in fat, but they are also completely devoid of nutrition. They are 89% carbohydrates.

Pastes and pudding may be added directly to the bubble tea drink. Both mung bean paste and azuki bean paste are typical Taiwanese additions that give the drink more texture.

Some bubble tea shops top the drink with custardy egg pudding or frothy milk, just like a latte. It is very traditional for a boba drink in Asia to be topped with cheese foam, which has the consistency of whipped cream. However, this whipped topping has the savory flavor of powdered cheese.

Here are some fun FAQs about bubble tea.

Why Are Tapioca Pearls Black?

Tapioca pearls are black because they are made from brown sugar. Food coloring and syrups may be used to make orange-pink, white, green, and orange tapioca balls. They are a solid color when raw but become translucent, like jelly when cooked.

Does Bubble Tea Have A Lot of Sugar?

You will also be asked how much ice you want in your cup. The options will be no ice, less ice, or normal ice. The more ice you order in the drink, the less the sugar in the tapioca tea will affect you. The fact that you can control both your ice and sugar level is great for people with diabetes and other people who need to reduce sugar consumption.

Why is Bubble Tea Made in A Machine?

Many bubble tea franchises have automated bubble tea production. The pearls, milk, and tea are sealed in a cup topped with a cellophane wrap and then automatically shaken. The customer is then given a large drinking straw to puncture the top of the cellophane so they can sip it.

What is Bubble Tea Mania?

Bubble tea mania refers to the early 1990s when the popularity of pearl milk tea spread all across East and Southwest Asia. It was particularly popular with young people who would line up for half an hour to get a drink.

These franchises soon spread to North America, where consumers fell in love with the drink’s coconut-like flavor and chewy tapioca pearls.

Bubble tea and boba tea are exactly the same things. If you want to limit this discussion to how bubble tea vs boba tea is seen in the United States, then you will find it is more common for people to call it boba tea on the west coast. People on the east coast of the U.S. call it boba tea.

In Japan, it is called tapiru, which means “drinking tapioca tea” in Japanese. Tapioca tea is so popular in Japan that a tapioca theme park was built in Harajuku, Tokyo in 2019.

In Singapore, China, and Hong Kong, its nickname is boba tea. There are many popular bubble tea chains in the far east, including Hey Tea, Koi, Gong Cha, Nayuki, Tiger Sugar, Youiccha, and Xing Fu Tan. There you might hear someone say, “Let’s go for a Hey Tea!”

So, to summarize it seems that Boba is the more common name in the far east for what is called bubble tea in Western countries. 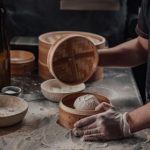 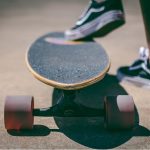